First Steps in the Sand

There’s nothing quite like watching a child observe his firsts. I dare say it’s as magical as the memory of experiencing my own. Today we watched our curly headed boy take his first steps in the sand. He got his first glimpse of the ocean. 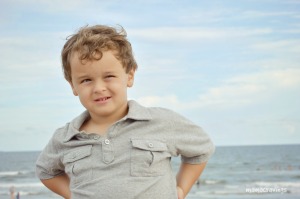 The first time my parents took me to the ocean, I was just a small child. I even remember how salty the air tasted. I remember the terrifyingly impressive scale of the ever rolling water. Pressing my toes in the cool sand while the warm wind whipped at my hair still rolls through my mind. And here I stood watching that same awe. There was that same quickening of the heart of a seemingly never-ending sky. I watch the same power of the waves pushing over the feet and swirling around the ankles. It was that gentle push of a tamed mighty wave.

His shoes were tossed aside as he rushed to the edge of sand and water. He held his breath while a tired wave reached just far enough to tickle his toes. He giggled with satisfaction and again with a nervous whisper, “‘Da ocean shuwre isth big.”

For a moment, but only a moment, he was still. He looked so tiny on that shore. I wondered if he noticed the scale of little boy to great-wide ocean. I wondered if it phased my fearless boy.

With a determined breath, he took another step. Then Another. And another still. By the time the murky salt water washed up to his knees, his fits of laughter had his entire body shaking.

After that moment, the stillness was gone. He ran, leaped, splashed, twirled, dug and rolled on every square inch of that beach. It seemed as if he would never tire, but eventually that sprint slowed to a stroll. He drank in the new scene of a day ending on the beach. He watched a brilliant orange sun melt into the briny sea. Weary and happy, he sighed. A sandy, baby hand reached for mine. The day was done.

We began that hike back to the truck, leaving a trail of sand and water behind us. With heavy eyes, “‘Tan we ‘tome back tomowrrow?” An answer of “soon” was satisfactory enough for the moment. He sighed again as the truck engine roared and started the journey back to home. Before the beach was quite out of sight he had fallen fast asleep. 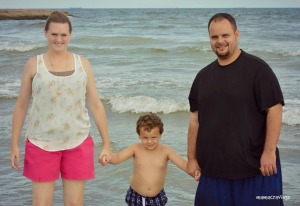 5 thoughts on “First Steps in the Sand”

Error: Twitter did not respond. Please wait a few minutes and refresh this page.